You could almost feel the excitement in the air on Monday, Dec. 17, as people crowded into the post office and the bank in downtown Hoopa to receive and cash their settlement checks.

Arlene Doolittle smiled as she showed off the checks that she and her friends had just received.

The checks were a part of a $49.2 million payment from the US Government to settle a 2006 lawsuit filed by the Hoopa Valley Tribe. The lawsuit was filed because of federal mismanagement of tribal trust funds and funds from trust resources like timber.

On Nov. 15, 2012, the Hoopa Valley Tribal Council authorized a one time per capita payment of $10,000 to every enrolled member of the tribe who was on the rolls as of 12:00 am that night, to be sent out as soon as the settlement money was received.

Payments for children will go directly into their Individual Indian Money (IIM) accounts, and the money will be held for them until they are 18 (with a high school diploma or GED), or 21.

A special tribal election on Thursday, Jan. 3, 2013, will decide whether the remaining third of the $49.2 million will be paid out to individual tribal members, or if will be kept in reserve to pay for things like elder payments or scholarships.

The Tribal Council also approved a $200 per capita payment for tribal members, which were mailed out on Thursday, Dec. 13.

Workers in the Fiscal Department worked overtime last week, and over the weekend in order to prepare both sets of checks in time.

Chelsee Gibbens said, “We worked pretty much all last week and over the weekend. For the $10,000 dollar ones we had to do a lot more because we had to take out deductions and enter them one-by-one into the computer.”

In addition to the two per capita payments sent out by the Hoopa Valley Tribe, the initial checks for the Cobell Settlement also started to arrive on Monday.

The Cobell Settlement monies were paid out by the US Government to members of tribes across the continent in a separate case of mismanagement of Individual Indian Money (IIM) accounts.

On Monday morning, crowds formed at the post office and at Coast Central Credit Union downtown. Officers from Hoopa Tribal police were stationed at both locations.
Police Officer Karl Norton said that there were no problems. 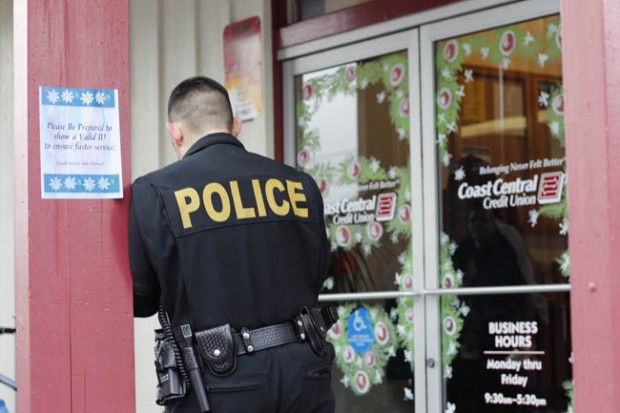 Hoopa Tribal Police were on hand at the post office and the Coast Central Credit Union in downtown Hoopa on Monday, Dec. 17, 2012, to help direct the crowds of people cashing and depositing their settlement checks. There were no reported incidents, and wait times at the post office and bank were about a half-hour during the middle of the day./ Photo by Kristan Korns, Two Rivers Tribune

“It was pretty calm. I don’t think anyone was trying to mess around today, with the law enforcement presence here,” Norton said.

For postal workers, the rush of checks came right in the peak of their holiday season, and on their busiest day of the week.

Ronalda Jordan said, “It’s the biggest day of the year for the postal service because of the holidays.”

The mail went through anyway, despite the load and despite the fact that mail and packages arrived an hour late from Eureka.

Kelly Jarnaghan, the Officer in Charge (OIC) at the post office, said, “It was a heavy load, but it always is on Mondays.

A letter from the Hoopa Valley Tribal Chairman Leonard Masten Jr. was included with each of the $10,000 per capita checks, praising Tribal Attorney Tom Schlosser and the tribe’s past leadership for working towards the settlement.

“The Settlement Agreement – and therefore these payments – would simply not have been possible without the hard work of the tribe’s past leadership,” Masten wrote. “I hope you will join me in my heartfelt appreciation for those who worked so hard to make this payment possible.”

In accordance with Title 17 U.S.C. section 107, any copyrighted material herein is distributed without profit or payment to those who have expressed a prior interest in receiving this information for non-profit research and educational purposes only. For more information go to: http://www.law.cornell.edu/uscode/17/107.shtml